Many of the cross-disciplinary concepts and projects created and developed since the late nineties by Mário Caeiro, parallel to his teaching and academic practice, promote moments of heterotopia in the urban realm. In Lisbon, this lead cultural theorist Malcom Miles to define his initial work during Capital of Nothing as cultural activism – some of his projects championing new forms of urban design and cultural renewal ‘from below’ while others were seen to develop challenges to the cultural amnesia and solipsistic urbanism of one of Europe’s most decadent cities (Anthony Iles). In Portugal and abroad, the theme of Light is recurrent in his initiatives.

He loves to think strategies for projects and texts by means of schemes where the interplay of axes might inspire the development of an original endeavour (idea). Some of these become diagrams of a specific way of thinking and working. It has become a quite useful mode to plot Concepts, Project narratives and of course rhetorical moves. 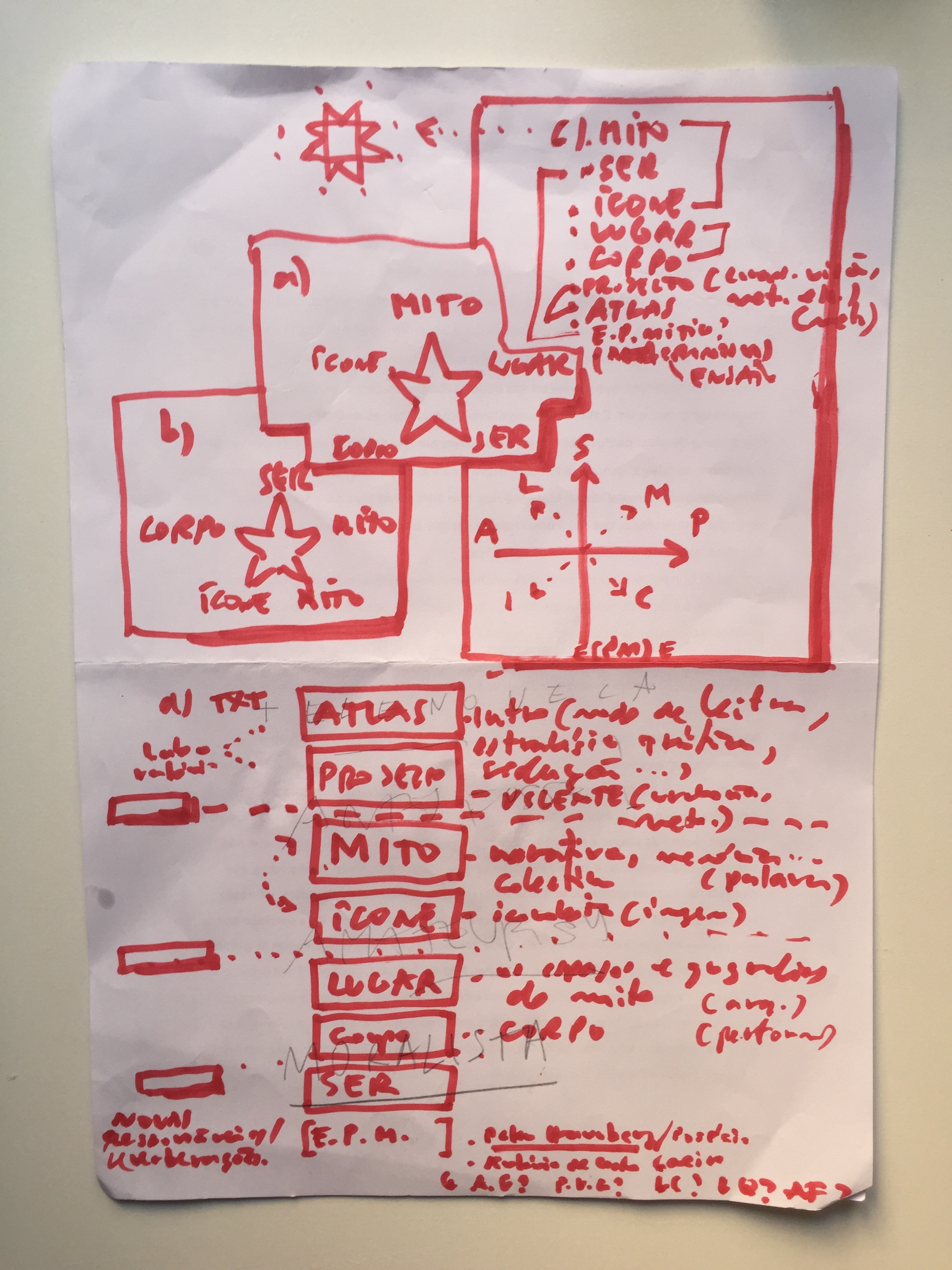 This commitment with Light Culture led to a long-term cooperation with artist Jana Matejkova-Middleton or the curating of Light Curve, an in situ installation by Alessandro Lupi at Palazzo Bembo, for the 14th Architecture Exhibition – Venice Biennale 2014.

In such projects an essayistic background (João Barrento) fuels a curatorial practice first experimented in the transdisciplinary events Retratos da Alma (1995) and Um Cálice de Dor (1999) – both organized by the independent design studio Fortespolio. Eventually these actions became the model for tackling issues of urban form creatively and collaboratively, while connecting artistic work to theoretical production, be it in the framework of cultural associations he co-founded such as Extra[muros[ – associação cultural para a cidade [cultural association for the city] (active between 2000 and 2008) and Palavrão – Associação Cultural [Cultural Association] (2011-), be it as a curator and author for other entities. In this framework, he organized diverse cultural events, such as retreat symposia and several international conferences: Luzboa – Desenhar a Luz (2003), Efémero.Criação.Acontecimento (2009), Político.Criação.Valor (2010), Urbano.Criação.Interface (2016), key-note speakers being the likes of Christine Buci-Glucksmann, Malcolm Miles, Maryvonne Saison, Paul Ardenne and Krzysztof Nawratek. His theoretical output has been regularly printed mainly in magazine articles.

Mário Caeiro started his career as a graphic designer for Editorial Caminho, later doing graphic design projects for other publishers, in particular Círculo de Leitores (ex. Complete Works of, among others, José Régio, José Rodrigues Miguéis, José Gomes Ferreira and Carlos de Oliveira – with Fortespolio – and Padre António Vieira – in his own name). He’d become editorial coordinator of several book projects realized in the framework of cultural associations and ESAD.cr.

For updated information about his work, see Projects.

Mário Caeiro is the author and/or curator of several urban concepts, urban projects and exhibitions.

Lisboa Capital do Nada – Marvila 2001 / Lisbon Capital of Nothing – Marvila 2001 is a flagship project in Mário Caeiro’s career. It was a transdisciplinary event which took place in Marvila, a peripheral district of Lisbon. Thirty days of public events including art, architecture, urban design and photography projects, publications, public debates and performance activities, directed by a mobile, versatile and informal coordination team, which ensured that a provisional community was created. In the context of debates on place, space, and identity in a period of globalisation, such collaborative arts projects can be seen as a means to identity formation for participants, outside consumption.

For Malcolm Miles, this kind of initiatives are situated perhaps between the arts and the development work of NGOs, and also imply a viable, democratic public sphere distinct from a public realm constituted conventionally by urban public spaces or marked by public art, in addition having a capacity to evoke the imagination of new social formations.

Luzboa is another project he created, with Marc Pottier, in 2003, to promote in 2004 and 2006 several interventions in public spaces In Luzboa – the name came from playing with the words Luz (Light), Lisboa (the city of Lisbon) and Boa (Good) – art (culture and the creative arts) and light (science and technology) were used to promote urban development and to revitalize public space. Luzboa was a pioneer project in Portugal, built at the intersection between economic (science and technology innovation) and socio-cultural trends (culture and arts). (Teresa Alves) Among the artists commissioned were Luís Campos, Javier Núñes Gasco, Ron Haselden, Yann Kersalé, Carlos Nogueira, Miguel Palma, João Pedro Vale and Jean-Luc Vilmouth.

Since 2011, Caeiro curated the Project VICENTE, dedicated to a creative revisitation of the myth of Saint Vincent, the Patron Saint of Lisbon. Below the links to each edition:

The Project contributed to the realization of the chamber opera CABARET VICENTE, by José Eduardo Rocha. A clip of this show here.

A retrospective exhibition was produced by Projecto Travessa da Ermida and Museum of Lisbon, with Paulo Almeida Fernandes as co-curator. VICENTE. O MITO EM LISBOA was presented at Palácio Pimenta.

Between 2011 and 2012, Caeiro curated Lux Scientia, a trans-European collaboration within the British Light Festival Lumière[1]. Three artists were comissioned to create a lightwork to create a unique programme of work shared across three international light festivals: Skyway in Poland, Valgusfestival in Estonia, and Lumière in Durham. Simeon Nelson, Dominik Lejman and Leonardo Meigas collaborated with a scientist to develop their lightwork and all three works explored both the scientific and aesthetic aspects of light. Lux Scientia aimed to act as a platform for debate about how the different artists’ vision related to the their installation in different spaces and environments, to raise awareness of a shared European heritage, foster mutual understanding, and celebrate the cultural diversity.

Cosmic Underground (2012), created with Jan Swierkowski from B61 Instytut, was defined by Mário Caeiro as a grand scale artistic performance connecting the East and West of Europe by means of a train trip. Presented in thirteen cities in five countries – Estonia, Latvia, Lithuania, Poland and Portugal – at the heart of this transeuropean artistic project connecting the European Capitals of Culture in 2012 (Tallinn and Guimarães) was the idea of connecting people, beyond the historical, cultural and linguistic diferences inherent in the European canon. The European railway infrastructure became a stream promoting dialogue and equality through audiovisual installations, theatrical performances and live music happenings by, among others, artists Raoul Kurvitz, Flo Kasearu, Elina Cerpa, Eva Tallo & Elo Liiv, Justyna Chowaniak, Mariusz Lubomski, Stefan Kornacki, Tomasz Cebo, André Banha and Pedro Bernardo.

Inside the city walls of the Historical Village of Óbidos, Caeiro curated during the Christmas of 2013 time Óbidos Luz, an event which included a monumental video-mapping projection, site-specific installations and artworks by Het Pakt, Joachim Slugocki + Katarzyna Malejka, Visual Stimuli and Limelight. A book telling the whole ‘story’ of this flash production was published in 2015.

For some theoretical output [in English] concerning this Project, please check here.

Lightcraft Belmonte (2015), co-authored and co-curated with Frédéric Coustols, was another event celebrating the spirit of a place, the 500 year old Palácio Belmonte in Lisbon. The show consisted in the presentation of outdoor and indoor artistic visions by Alessandro Lupi, Jana Matejkova-Middleton & Rory Middleton and Stefan Kornacki.

Previously in the same year, Lux Matrix Tallinn, Caeiro created with Indrek Leht from Valgus Festival an event consisting in a series of small and medium-scale installations, interventions and actions, acknowledging and exploring the character of the Old Town of Estonia’s capital through the work of artists such as Anita Ackermann, Marco Brianza, and Dominik Lejman, among others.

In 2017, there was a small second edition of Lightcraft Belmonte. Anita Ackermann‘s work was one of its highlights.

SKYWAY is a concept developed by Mário Caeiro in 2009 for the city of Toruń, in Poland.

LUX MATRIX, firstly presented in Tallinn (2015) was realized in the framework of the local Valgus Festival. LUX MATRIX is the model for a Boutique Light Festival, consisting in a spiraled series of small and medium-scale installations, interventions and actions, as a way to acknowledge locality in a subtle and detailed way. Exploring the cultural atmosphe and the urban form of spiritual heritage sites, LUX MATRIX stands for a productive understanding of urban and cultural identity deliberately contrasting with the dynamics of mass tourism.

In 2012 Mário Caeiro developed the concept and curated MatrizCaldas. Fluxo. Cidade. Arte. Caldas da Rainha 2012-1512 [MatrizCaldas. Flux. City. Art. Caldas da Rainha 2012-1512], a public art project initially developed at ESAD.cr in 2008, in order to commemorate the 500 years of the city of Caldas da Rainha and the signature of the Livro do Compromisso by the Queen D. Leonor in 1512. Beyond mere celebration, contemporary artworks were added to to the permanent exhibition including medical instruments from different ages.